It’s always a pleasure bringing a customer’s custom dream bike to life, especially when budget isn’t the main concern. It gets even better when the customer is eager to incorporate the latest technology into the build and we get some hands-on time with the best components on the market. Here is what we came up with: 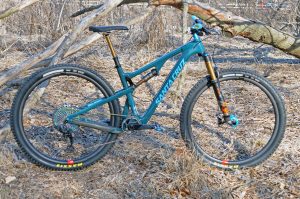 The concept for this bike was to start with a Santa Cruz Tallboy CC carbon frame and build up a mountain bike which would be light and snappy enough to feel at home in a cross-country or endurance mountain bike race, but at the same time be capable enough to handle rugged, back-country trails. We went with the top of the line CC carbon version of the Tallboy frame in Forest Green with Baby Blue logos. The Tallboy is the perfect frame for this project with it’s 110mm of VPP suspension, 68 degree headtube angle, and boost spacing, placing it firmly at the trail end of the cross-country category. 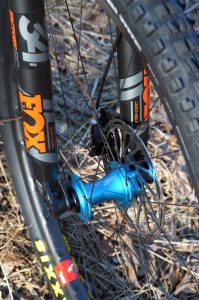 A Fox Step-cast 34 120mm fork is the highlight of the suspension package. The Step-cast version saves a half a pound of weight over a regular Fox 34 fork while retaining the same stiffness. The fork is paired to a custom-tuned Fox Float Factory shock at 110mm to handle the suspension duties at the rear of the bike. We also went with a Fox Transfer dropper post at 125mm. 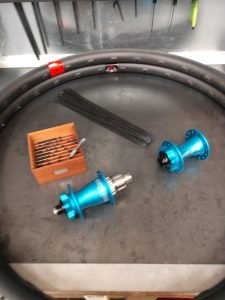 You can buy Santa Cruz Reserve x Chris King wheels straight from the Santa Cruz factory, but we decided to source the parts and build the wheels in-house. We mated Chris King ISO B hubs in turquoise to Reserve 27 rims using Sapim Race spokes.  The carbon rims carry a lifetime warranty through Santa Cruz, and Chris King hubs have one of the best reputations in the industry for durability and longevity, so we are confident these wheels will be able to handle many miles and years of hard riding. We covered the wheels with Maxxis tubeless tires; a Minion DHF on the front and an Aggressor on the rear. 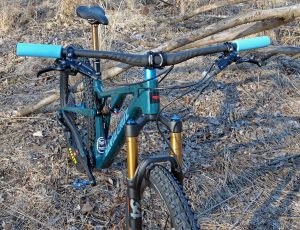 A Santa Cruz 760 carbon riser bar with ESI Extra Chunky grips will control the bike. We also used a Chris King Dropset that matches the hubs. 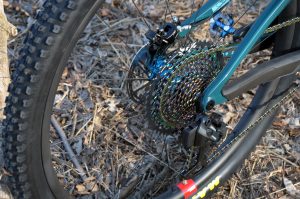 The most exciting part of the build is the Sram XX1 Eagle AXS electronic drivetrain. Like their previous road groups, the AXS wireless shifting was easy to set up and shifts flawlessly. 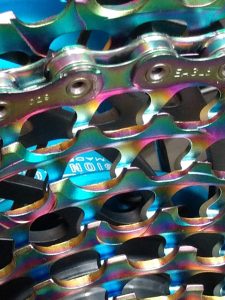 The rainbow coating on the chain and cassette is stunning in person. 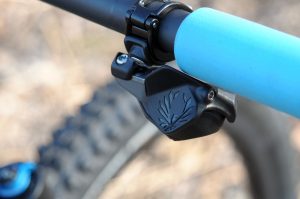 The shift button is very ergonomic, and feels natural to use if you have been using Sram mountain bike shifters in the past. 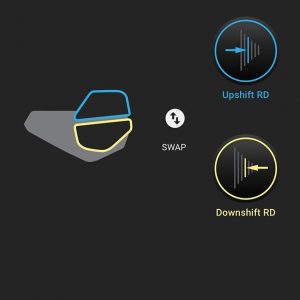 One of the coolest features of the new AXS system is the ability to customize the system through the companion app. You just pair the system to your phone and you can adjust the shift functions, check for firmware updates, and check your battery levels.

This error message is only visible to WordPress admins

Well, it's been a pretty wild ride since 2019 when we last had a cyclocross racing season in Chicago! We sincerely hope all of our customers (past and present) and friends of the shop are hanging in there and doing...

We just had the chance to build up another Santa Cruz Jackal dirt jumper and deliver the bike to it's new owner. These builds are always fun for the shop since the Jackal is only offered in a frame from...

We've got some big news coming out of Tailwind Cycles during these strange and unprecedented times. We're moving the shop to a new and bigger location! It might not seem like the best or most logical time to do something...

Here we go again! Whether you are ready or not, 'cross season is upon us.  And, once again Tailwind Cycles is back with our ‘Cross Cup service package.  The package will stay the same as last year. Bring your bike...

The mission: build a custom mountain bike weighing 20lbs with gears and front suspension, and make it durable enough to hold up to endurance mountain bike racing and trail riding on chunky East Coast trails. Not an easy task, but...

We just finished up a fun build for a customer this week, a custom Santa Cruz Chameleon. We started out with the top-of-the-line SE+ kit on the carbon frame and upgraded a few things from there. You really need to...

"Who mountain bikes in Chicago?" "There are no mountains here." "This isn't Colorado, California, Arizona, or North Carolina. Why would I get a pricey mountain bike if I live in this big city with no mountains?" We hear things...

Well, cyclocross season is upon us once again. Tailwind Cycles is back with our 'Cross Cup service package. The package will stay largely the same, with a few minor changes. The service will stay the same. Bring your bike into...

We are happy to announce Tailwind Cycles as the exclusive Kind Human fit center in Chicago! We delivered our first bike to a customer this week, a Kampionne aero road bike.   The Kampionne is impressive as a race bike, and...

If you have been in the shop sometime in the last couple of weeks, you may have noticed a new face behind the counter. Well, it's time to officially announce our new mechanic Rawny Semba. We're calling him the new...